Indonesia is considered one of the hotspots for geothermal energy due to its many volcanoes. But salt and heat are affecting the geothermal energy plants and endangering their safety and economic viability. A team at BAM has coated a low-cost, locally available structural steel in such a way that a sustainable and safe operation of geothermal power plants is now possible – even under extreme circumstances.

Up to 40% of the worldwide geothermal resources are hidden underground of the island. “This is due to the many volcanoes,” explains Dr. Ralph Bäßler from BAM’s Corrosion and Corrosion Protection division. Theoretically, the energy from underground could supply the entire country of Indonesia and its industry with electricity. However, energy production using geothermal heat can be time-consuming, expensive and challenging – especially in Indonesia. “The water that is pumped up is extremely salty,” explains Bäßler. Thus, pipes and other parts of the power plant which are important for operation must be built with high-alloy stainless steels to prevent corrosion from quickly attacking the material. But such stainless steels are difficult to source in Indonesia. Importing them is expensive, presenting an obstacle to investment in geothermal power.

To ensure the safe and cost-effective operation of geothermal energy plants, Indonesia needs suitable materials. There is an abundance of low-cost structural steel with little corrosion resistance in the country. But “if this carbon steel was to be used in geothermal power plants, there would definitely be an immediate corrosion problem,” continues Bäßler.

His Indonesian colleague, Dr. Gabriela Aristia, initially tried to protect the structural steel with a so-called alkyd resin-based coating. In principle, this prevents the aggressive saltwater from reaching the metal surface. The test specimens were exposed to a salt solution at 150 degrees Celsius, which is comparable to Indonesian geothermal water. As a result, the coating did not withstand the high temperature. Therefore, two more components were added: a silicon dioxide filler, which makes the material heat-resistant and polyaniline, which actively counteracts corrosion.﻿

The modified structural steel was subjected to a stress test at 150 degrees Celsius in a salt solution for six months. “The experiments were very promising,” says Aristia. “It shows that the combined components make the coating system heat-stable and prevent the formation of rust.”

A boost for geothermal energy in Indonesia?

The team at BAM now wants to make the coating system available to plant operators in Indonesia so that, according to Aristia, “it can be tested under realistic conditions in a geothermal power plant.” For her as an Indonesian, this is very important: “Protection against corrosion is crucial because it determines the service life of these power plants. Our work could significantly improve the efficiency of energy production with geothermal energy.” 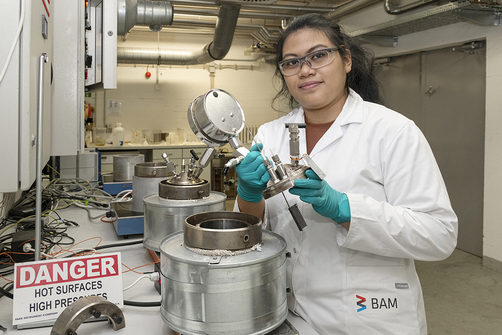