The BEAT-AMR project is a partnership against biofilm-associated expression, acquisition and transmission of antimicrobial resistance.

The work of our international consortium relies on a trans-European research infrastructure of microbiology, material science, and clinical research laboratories. Fundamental processes will be investigated in laboratory studies with the common biofilm-forming pathogen Pseudomonas aeruginosa. Biofilms will be grown on test surfaces and investigated with imaging technologies, such as atomic force microscopy and confocal laser scanning microscopy, and with modern sequencing technologies including metagenomics and metatranscriptomics.

The aim of the project is to establish a fundamental understanding of the interplay between antimicrobial surface coatings, microbial biofilm formation, and antimicrobial resistance (AMR) evolution.

The consortium will use the acquired fundamental knowledge to test specific hypotheses directly in clinical settings at the final stage of the project. This approach will enable us to formulate clinical recommendations for the combined use of antimicrobial surfaces and antibiotics that minimize resistance spread and evolution.


Budget: ca. 1.3 Mio. € from the Joint Programming Initiative on Antimicrobial Resistance (JPIAMR).
The German Ministry for Science and Education (BMBF) finances the works conducted at BAM.

Antimicrobials are used as antibiotics in medicine to fight microbial infections or as biocides to, for example, preserve materials and disinfect surfaces. The toxicity of antimicrobial compounds to microorganisms creates a strong potential for evolution of resistance. Antimicrobial resistance (AMR) is defined as the ability of a microorganism to grow in the presence of high concentrations of toxic compounds that are sufficient to kill non-resistant members of the same species. The emergence of AMR poses a major threat to modern health care systems by compromising our ability to control microorganism.

Biofilms are microorganisms living on surfaces that become embedded within a self-produced, extracellular matrix composed of polymeric substances like long-chained sugars, proteins or DNA. Biofilms can form on tissues or on biomedical surfaces, such as blood catheters or implants, where they act as a reservoir of potential healthcare-associated infections. In fact, it has been recognized that biofilms underlie the majority of chronic bacterial infections.

Objective: Identify antimicrobial-antibiotic combinations that select for and against antibiotic resistance and determine population dynamics of resistant strains in biofilms.

Contribution of BAM to BEAT AMR

Genes involved in phenotypic adaptation to antimicrobials on surfaces


Objective: Identify genes that are involved in phenotypic adaptation against antimicrobials in biofilms.


Contribution of EMPA to BEAT AMR

Objective: Determine the functions of the identified genes and of known AMR genes with regard to adhesion strength and whole biofilm biophysical properties, including transport of antimicrobials in biofilms.


Contribution of the University Medical Center Groningen to BEAT AMR

Contribution of the University of Southampton to BEAT AMR

Bacteria living in biofilms can tolerate much higher antibiotic concentrations compared to planktonic bacteria and survive long enough to acquire AMR by changing their genetic code via mutations. They form persistent, hard-to-treat infections and exhibit an intrinsic biology that promotes the development and transmission of AMR. Preventive and therapeutic strategies against biofilm infections in clinical settings commonly involve the application of multiple antimicrobials. In addition to the implanted biomaterials being equipped with antimicrobial coatings, antibiotics are systemically administered to patients simultaneously.

The goal of the consortium is to determine how bacteria adapt to antimicrobials during biofilm formation on surfaces, how AMR mutations are acquired and evolve within mature biofilms, and how population dynamics within biofilms affect the transmission of AMR in multi-drug environments.

The work is funded within the Joint Programming Initiative on Antimicrobial Resistance (JPIAMR). 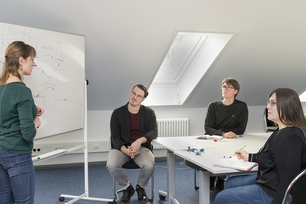