Hydrogen is to replace fossil natural gas in the European gas grid as soon as possible. The Bundesanstalt für Materialforschung und -prüfung (BAM) is developing high-precision calibration gases for an EU-wide project. They are the basis for later being able to calculate consumption quantities and costs exactly and to accelerate the energy turnaround.

In order to achieve the goal of carbon neutrality by 2050, the European Union has decided to decarbonise its gas network: In the future, hydrogen is to replace the fossil energy carrier natural gas as far as possible. In view of the current supply crisis, this goal takes on a special urgency.

It is a monumental task: The gas network in the European Union extends over almost a quarter of a million kilometres, of which about 38,000 kilometres are within Germany. Before this network can be gradually adapted to hydrogen in the coming years, several technical challenges must be overcome: For example, it is currently not yet possible to measure the flow of hydrogen-natural gas mixtures or even pure hydrogen with the necessary precision and thus to exactly determine consumption. "The gas industry has been using mathematical models so far, but they are not sufficiently validated," explains Dirk Tuma from BAM. "High-precision measurements of the mixtures and flow rates are indispensable for accurate accounting of consumption. This is of great importance for both industry and private end consumers. In view of the enormous quantities involved, uncertainties in the per mille range already mean large cost differences."

The chemist is part of a large international research project that aims to address these metrological questions. It was initiated by EURAMET, the European Association of 37 National Metrology Institutes. The aim is to optimally support the gas industry in the conversion from natural gas to hydrogen and thus to accelerate the market ramp-up of hydrogen.

BAM will develop high-precision calibration gases for the project in its hydrogen competence centre H2Safety@BAM: Mixtures of natural gas components and hydrogen that are accurate in their composition to within 0.01 per cent. "The particular challenge is to produce mixtures from the initial components that are demonstrably stable over a period of at least three years," explains Dirk Tuma.

BAM's highly accurate reference gases are the basis for clarifying all other metrological issues. They can be used to calibrate and further develop measuring instruments so that flow rates can later be calculated precisely in practice. They are a prerequisite for setting up a measurement infrastructure in Europe and converting the existing gas network to hydrogen.

18 renowned institutions from research and industry, including France, Spain, the Netherlands, Norway and Great Britain, are participating in the project of the EMPIR programme (European Metrology Programme for Innovation and Research). In addition to BAM, the Physikalisch-Technische Bundesanstalt (PTB), DB Gas- und Umwelttechnik, Gastransport Nord and Open Grid Europe are represented from Germany. 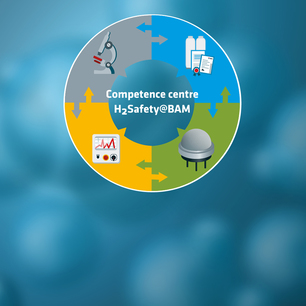 Centre of competence for H2Safety@BAM