The Bundesanstalt für Materialforschung und -prüfung (BAM) is represented at the "Week of the Environment" by the Federal President and the German Federal Foundation for the Environment with a new measuring method for microplastics. The method makes it possible to collect precise data on the input pathways of micro- and nanoplastics into the environment more quickly than before. It thus creates the empirical prerequisite for effective prevention strategies.

Under the motto "This is the way of the future!", Federal President Frank-Walter Steinmeier and the Deutsche Bundesstiftung Umwelt (German Federal Foundation for the Environment) invite you to the sixth "Week of the Environment" on 10th and 11th June 2021. The event traditionally honours innovative environmental protection topics and projects. Due to the Corona pandemic, it has to take place as a hybrid format in the park of Bellevue Palace as well as with digital expert forums.

Among the 150 exhibitors selected by a jury of experts is the Bundesanstalt für Materialforschung und -prüfung (BAM). BAM is presenting an innovative measuring method for microplastics at the Week of the Environment.

The tiny particles can now be detected in all the world's oceans, lakes, rivers, soils, organisms and even in the air. Worldwide, many millions of tonnes of microplastics - and the much smaller nanoplastics - enter the environment every year. Exactly from which sources most of the inputs originate, however, is still unknown. This is because the figures are based on estimates or projections, which in turn are based on only a few concrete measurements.

The reason for this is as simple as it is momentous: micro- and nanoplastics are very difficult to detect and precisely quantify. The particles often measure only a few thousandths or even only millionths of a millimetre.

Previous methods, which are mainly based on microspectroscopy, are time-consuming and do not detect particularly small particles - which are suspected of having a harmful effect on organisms.

Scientists at BAM have therefore developed a new measuring method that is no longer based on spectroscopy. Instead, samples are heated and the resulting gases are then analysed in a gas chromatograph coupled to a mass spectrometer. In a sense, the analyser "smells" the tiny particles instead of identifying them optically. The advantage: the method is about ten times faster, it also detects particularly small particles and, for the first time, the abrasion of car tyres - presumably one of the largest sources of microplastics.

Together with the company Gerstel GmbH, the BAM team has developed an analysis device from the patented method, which is already in use in many laboratories internationally.

As a supplement, BAM also offers the world's first reference materials for microplastics. The substances are important in order to be able to compare different measurement methods and values.

"With the analytical device and our reference materials for micro- and nanoplastics, we as scientists are creating the empirical basis to be able to discuss avoidance strategies and ultimately to be able to define effective measures as a society," says Korinna Altmann from BAM.

"Environment - this is one of the five major subject areas on which we at BAM research, examine and advise on a daily basis," says BAM President Prof. Dr Ulrich Panne. "As scientists we have to think beyond the boundaries of our laboratories. We have a responsibility to protect the basis of life on our planet. Our research on microplastics is an important contribution to this."

BAM's digital stand at the Week of the Environment 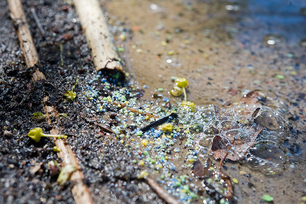