How we work The Trace Finder

Dr Björn Meermann has been leading the Inorganic Trace Analysis Division at BAM since June 2019. He previously worked as a chemist at the Federal Institute of Hydrology (Bundesanstalt für Gewässerkunde) in Koblenz and also lectured at the university there. A discussion on precision and the frontiers of research.

Mr Meermann, what does a trace analyst actually do?

Everyone has no doubt held a bottle of mineral water in their hands before: the label states how many milligrams of magnesium, potassium and calcium the product contains per litre. This is an example of what we can verify with our techniques – although at BAM, we’re not usually investigating sparkling water and we work in the micro- and nanogram ranges, not milligrams. In other words, about a millionth or billionth part of a gram; similar to looking for a sugar cube that has dissolved in a large lake.

Why is it important to trace certain substances in such minute quantities?

Let’s take the example of chromium trioxide – oxidised chromium – which can occur during the dyeing and tanning of leather and is considered to be carcinogenic. One molecule of the compound may, under certain circumstances, be sufficient to trigger so-called carcinogenic effects – there is no lower threshold value for carcinogenic substances. This is why it’s important to look more closely at certain elements and their species – such as mercury, cadmium and lead – and to advance into these extreme measuring ranges.

Is that the appeal of your work, to reach a limit? Is trace analysis a type of extreme sport?

If you put it that way, yes. I am also keen to tackle challenging analytical questions such as: how can I develop a technique together with my team and how can devices couple with one another to shed light on the unknown? The closer one comes to the limits of machine performance, the greater the challenge becomes. At the same time, I am fascinated in answering unresolved scientific questions and cooperating with colleagues from other disciplines.

Do you have to bring a certain disposition for this profession, such as being exact, not to say pernickety?

Precision, diligence and neatness while working are all very important to me and absolute necessities – however, I don’t have a trace analysis scale in my kitchen. But I do like to be exact: for example, if we have arranged to meet up at 9:15, then you can assume that I will be there at 9:15, otherwise I’d give you a call. But that doesn't mean I'm a stickler in all areas of my life.

You came to BAM from another federal institute, the ‘Federal Institute of Hydrology’ in Koblenz and you also lectured at the university too. Would you say that federal research institutions have a certain scientific culture?

Firstly: the opportunities at research institutes funded by the Federal Government are fantastic – it would be hard to find them anywhere else. At BAM, we always have the newest of the new in the laboratory because we perform sovereign tasks that require extreme precision. At the same time, we are also active in policy consultation, but we are still scientists that want to be the first involved in a new topic. That’s how we’re built. So if you are a researcher working on an explosive question, you have to be quick to publish it, because otherwise another group working in a similar field may beat you to it. Thus, we have to be fast and the first in some areas to achieve a degree of visibility in science. We owe that much to our financier – the Federal Government.

What would you like to focus on in your division in the future?

I will give two examples, the first comes from the interface between materials and environmental analysis: we are currently developing new methods to enable the analysis of the content of certain elements in individual organisms and even cells. For this purpose, we are using diatoms which we ‘feed’ with critical substances and subsequently investigate. In the future, we intend to use the ‘element fingerprint’ of an alga to derive information on the toxicity of substances and, at the same time, establish a new and safer evaluation system for them.

The second example concerns the field of nanoparticles which are only a few thousandths of a millimetre in size and are present in some foods, textiles and cosmetics, and can therefore enter the environment. We want to characterise and quantify these particles and create a database for their assessment at a later stage. Nanoparticles are now also being discussed as drug carriers in the human body. We want to develop powerful methods to investigate not only the stability and composition of these particles, but also their distribution in individual cells, and at the same time help to develop nanomaterials with new properties and make their usage safe. 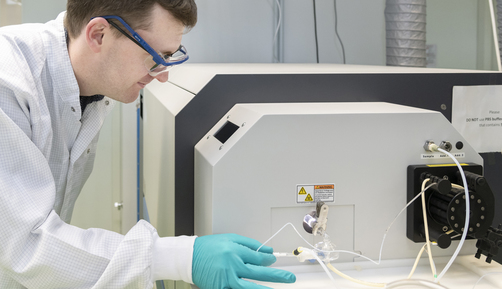