How we work The coordinator

If BAM scientists need a special component or material samples for their work, these are manufactured in the central workshops. The number of steps between idea and realisation doesn’t matter - Martin Hollesch always directs the process. As production manager in Testing Devices and Equipment division, he coordinates the entire production process. During the tour through the workshops, it quickly becomes clear that almost anything that could be needed in BAM can be manufactured here. Many planned work steps can now be transmitted to modern machine tools and executed by software.

Your department advertises with the motto “You have an idea; we’ll execute it”. In a nutshell: how does the idea get into the machine?

To start with, every incoming order is unique. If the task is more complex, I bring everyone together: the idea generator, the designer, maybe even a preparer or foreman, and I'm there as a coordinator. It is important for the client to know quickly: Can we execute the idea? If a solution presents itself, the process kicks off and I decide who does what and when. Drawings and special software support the employees on their machine tools. On request, the client can receive an interim report on the current state of production at any time, which is made possible by our modern planning system.

What is so special about your work at BAM?

The diversity is definitely very appealing. We get about 850 jobs per year, and we never know what the next task will be. That is also why we have such different production technologies. It is also motivating to know that our work flows directly into research. When I read that BAM operated a 3D printer in weightlessness and we provided a component for it, I know everything was done right. I also find it exciting and important to keep the team going.

If you ask around about Martin Hollesch in the establishment, they say: “He’s a veteran”. When and how did you land up at BAM?

I landed at BAM by chance in the mid-80s. I had finished school and started studying, but quickly realised that I needed to do work with my hands. I was able to get into the first year of a running apprenticeship here and complete my training as a machinist earlier. I quickly realised that there had to be more, which is why I embarked on three years of evening school and qualified as a master metal worker. I was then able to lead the workshops at BAM as chief engineer and then moved up to production management, which means the interface between the order and the workshop.

In these roughly three decades, have there been orders that you were unable to execute with your team?

Success means being able to do what is required in the moment. But there have also been orders that we could not fulfil because they were too extensive - either for the machines or for the team. That is the case, for example, with mass production. I cannot commit the team and machine capacity to a job for six months and reject all other jobs. In such cases, I look for external companies that can do the job. Sometimes things don’t work the way the client imagined it. But then we develop another way. We have also realised halfway through a job that we had taken the wrong route, and that is also part of the process. Ultimately, however, we always find a solution through creativity and inventiveness.

What were the highlights in your professional life to date?

The highlight was definitely when BAM decided a few years ago to support the central workshops, because as a scientific institution we need to produce scientific equipment, prototypes, individual parts and material samples. For us that meant: Now we’re stepping on the gas, now our ”company within the company“ is becoming even more professional. Today, we are a role model for comparable institutes - with a view to the machine technologies, but also with regard to our production planning system. We can really pat ourselves on the back!

Is there something you wish for your work?

My first wish would be for PhD students, students or trainees to be pulled in timeously if they foreseeably need our support for their work. Our young colleagues are only at BAM for a limited time and often only come when it is too late for the implementation of their ideas. It’s a shame, because their plans often have potential and are rich in ideas! And as far as production is concerned, I wish for technical development to continue. Maintaining the current level is not enough, because the material requirement and the quality of the jobs are increasing steadily.

Have you ever thought about changing jobs?

I have not had the urge to look for another field of employment, and at some point, it became clear that the deeper I go, the more I can achieve. And there have always been, and will always be, enough new things to do. For example, at the moment this also means passing on knowledge to the young employees, because the "old hands" with their know-how are going into well-earned retirement. Anyway, after about 30 years I come to work in the morning with a smile. As long as that is so, everything is fine. 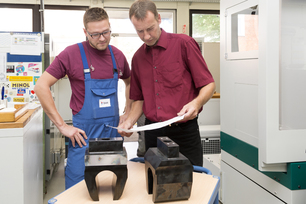