How we work Popular Cuts

Harald Götsch cuts pieces of metal using a mixture of water and fine-grained sand with high precision and reliability. This is typical of the BAM production facility which provides background support for scientists.

Bone-shaped contours are his specialty: this is the common shape of pieces of metal that Harald Götsch usually cuts. The team of the production facility produces large quantities of them over time, in all sizes, from different metals and various plastics, and often a whole series of them. The waisted form has to do with their use: they are flat tensile specimens. Later on the wide sample heads are clamped in machines and the sample is then stretched. This is the work of engineers and scientists. Before this, however, Harald Götsch has to be involved. He is a machinist locksmith and produces the samples together with his highly specialised colleagues from the workshop as the samples are for the various scientific departments. Once Harald Götsch has programmed and started his machine, the water jet surges forth under a thin film of water. Small bubbles form in it. The water then squirts out through a focusing nozzle at a pressure of about 3000 bar and cuts the material. A sand-like abrasive is added to the water resulting in a diamond-hard jet. "Cutting a series of samples is much faster using this method than by conventional machines," says Götsch. In addition, the edge structure of the metal does not change because it does not become hot when being cut, which is often important for the sample material. Harald Götsch's cuts are in great demand.

The BAM production facility team constantly receives such special tasks. The requests are coordinated by a central order management team. The team comprises a total of 35 employees including three engineers who are specifically responsible for development and design. Others are working at the lathes and milling machines in a large machine hall. Many components for the experiment rigs and the testing technology are produced by BAM itself. Heavy machinery is available for heavy steel components to be machined and a second building accommodates devices and equipment for precision fabrications. The specialists can produce probes down to the smallest scale as well as, for example, reaction chambers that are reminiscent of very small button cells – needed by scientists for chemical analysis.

Workshop assignments are often intertwined, therefore the specialists combine their efforts. For instance, Harald Götsch may produce a very specific base plate on his machine, which is further processed by his colleagues in instrumentation or precision engineering. Their team is optimally trained, says Götsch. Work orders of the week - also including drawings - are placed in a special wall shelf. A new project comes almost every day. Götsch really appreciates versatility and many of his colleagues share his opinion. Often, together with the clients and in coordination with the order management, they have to develop the actual production method. Harald Götsch knows only too well how to accommodate special wishes; particularly since the water jet cutter is regularly in demand for cutting exceptional component geometries. Who else can otherwise cut such complex elements? 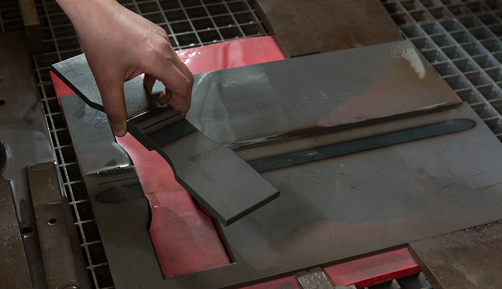