How we work Flying by

Dr.-Ing. Matthias Bartholmai is researching new sensor systems to detect even the smallest traces of gases in the air - from the air.

"My colleague Dr. Patrick Neumann and I cannot stop flying. We’ve been working together since 2008. Our first project was a flight platform that could measure small concentrations of toxic gases in the air. We took a quadrocopter and equipped it with special gas sensor technology, which we have constantly improved since then. Finally, we could even track plumes of gases to their source in flight. Patrick did his Ph.D. in computer science by developing the measuring flight deck and the algorithms for the visualisation and localisation of gas sources and successfully earned his Ph.D. In addition, he became an accomplished pilot, with countless hours of flight time.

In a large-scale research project headed by myself, we are continuing to develop communication and mobile sensor systems. Be it components to provide early warning of potential damage or to measure traces of environmental poisons in the air, a flying, remote-controlled measurement station for environmental poisons makes good sense. It means that you do not have to expose humans to risk when investigating gas emission sources and in addition, you can easily reach places that would be otherwise difficult to access.

This technology has developed rapidly since we started work on the first flight platform. Everything is lighter and more powerful. We now have a larger platform, which has six rotors and our test flights will begin shortly. We have integrated a self-stabilising open-path laser that can measure gases up to 30 metres away from the aircraft. The link between the flight deck and such a sensor is unique worldwide. Previously, we could only measure directly on the flight deck and that is where the rotors disturb the air and cause inaccuracies. Now we can avoid that. But we must continue our work to make the laser technology lighter. If a manufacturer really wants to build the aircraft at some later time, every gram will count. A five-kilogram overall weight would be a target, which has legal grounds for classification. That's still a long way to go." 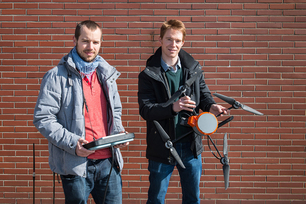