Environmental analysis often needs to take place in locations far from a well-equipped laboratory. BAM is developing mobile measuring methods that can be used almost anywhere. This sensor cannot only detect the oil contamination of water, it can also detect diluted petrol or diesel at a petrol station. For the measurements, one does not need much more than a smartphone.

Dr. Jérémy Bell is familiar with the problems of evaluating environmental pollution. "Oil spills are often found in places where the necessary analysis technology is not available. This is why we have developed a reliable test that allows us to estimate the extent of oil pollution on the spot," explains the scientist from the Chemical and Optical Sensing division. While common rapid tests often can’t do much more than detect oil in water, the new BAM method provides specific data on the water contamination right on the spot. The test equipment is simple: a jar, a few strips of paper and a smartphone with a special attachment.

"We use the mobile phone to determine the amount of oil in the water," explains Bell. A fist-sized attachment must be placed over the smartphone’s camera or a small micro-spectrometer connected to it to be used for chemical analysis. "The measurement itself is very easy," says Bell and demonstrates it. He takes a water sample from the stream or lake with a jar, adds a few microlitres of a liquid that extracts the oil and shakes it for one minute. He then dips a paper test strip in it, takes the paper strip from the jar and places it into the measuring attachment and launches an app on his mobile phone. The app developed by BAM receives the data via Bluetooth or directly from the camera and converts it into data, which is shown on the display. "It was our goal to develop a cheap rapid test that does not require any special expertise," explains Bell. The World Health Organization (WHO) has explicitly asked for the development of rapid tests to improve the possibility of environmental analysis, especially in poorer countries of the world.

Bell’s team worked closely with BAM's Sensors, Measurement and Testing Methods division and IT Support in developing and validating the measurement method. "The colleagues quickly came together for this project despite their different expertise," says Bell. The respective teams rapidly developed an application, which is simple and safe to use.

The first practical tests have already taken place. "We measured the oil pollution in the Wannsee, in the Havel and the Spree and found a good match with the regular, official measurements of the Berliner Wasserbetriebe (Berlin Waterworks)," reports the researcher regarding the results of a measuring campaign in the summer of 2018.

One detector, many applications

The measuring principle developed at BAM is not limited to the special application of oil-contaminated water because the crucial know-how is in the paper. The surface of this water-repellent test strip can be coated with different sensors. "We use materials for the sensors which, when irradiated with light, emit a special light whose intensity and colour is then measured," Bell explains the measuring principle which is known by specialists as fluorescence. If the material that makes up the sensor is affected by oil for example, the colour and brightness of the emitted light will change. "Modern mobile phone cameras and micro-spectrometers recognise this effect very reliably and can thus be used for our data evaluation," says Bell.

The process is also very useful for checking the quality of oil products such as petrol and diesel. For example sulphur-containing, cheap kerosene is very often mixed with diesel. Engines can be damaged and the environment polluted as a consequence. The team has developed a sensor based on our fluorescence technology that immediately recognises the adulteration of fuels. For this purpose, the test strip has been coated with a substance that is very sensitive to the viscosity of a fuel. This property almost always changes when kerosene or diesel are being mixed.

The users benefit from the variable concept. They only need to buy the attachment for the smartphone once and then they can take very different measurements depending on the test strip used. "We wanted to develop a low-cost system with great potential," says Bell. External partners will help introduce the test to the market. 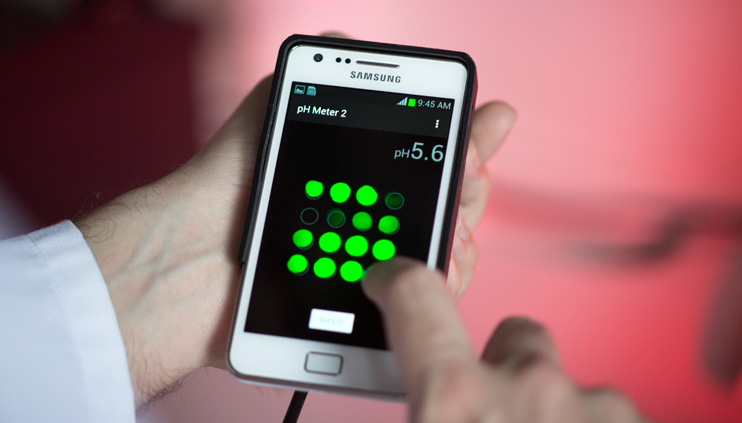