"It made us tougher, gave us a strong robustness and determination" From Aleppo to Berlin

Ahed Almalla escaped from Syria in 2015 and now lives with her partner and two year old child in Berlin. She began studying chemistry in Aleppo and is currently writing her master's thesis on the corrosion of nanocomposite thin films on aluminium surfaces at the FU Berlin. As a participant in the programme "Open doors, open minds", which supports young female refugees, she completed a two-month internship in the Interfacial Processes and Corrosion division in 2018.

Why did you decide to study chemistry?

As a child, I was always interested in science. I watched and was fascinated with what experiments can achieve, such as creating superheroes or even taking villains down. Maybe at some point, I wanted to become a chemist to create my own superpowers, who knows! Therefore, I had this scientific desire and I completed my secondary school in science and later on, I specialised in chemistry at the university of Aleppo.

How did you find out about the internship at BAM?

I was participating in a programme called Open doors, open minds which is a program for vocational orientation and political education, particularly for young refugee women between 18 and 27 years old. Part of the programme was providing participants with 3-month long internships months in companies, institutions, like ministries, administrations, parliament, or a non-governmental organization. And I was interested in undertaking an internship at the BAM.

What was your first impression of BAM when you started working here?

As soon as I come through the entrance, I looked around and said: how huge! BAM was like a small city surrounded by borders inside the city of Berlin itself. I was always getting lost between buildings and rooms whenever I wanted to reach someone or somewhere.

Are there any differences between research institutions in Syria and the work among scientists at BAM?

I needed to leave the country after finishing my bachelor’s degree at the University of Aleppo. So, I was not involved much within the research field there. But I did experience three years of studies during the war while everything was raging, and I can tell that the situation there is barely surviving. The universities have a large shortage of all basic materials, instruments and basic life services such as electricity or water that a master or a Ph.D. student need to complete, or at least move forward with their research. Due to the war, many professors and academic teachers had to leave the country, leaving the institutions with a smaller number of teachers and supervisors. Therefore, the Ph.D. and master student numbers are rather limited in comparison with the universities in Germany. Additionally, most of the students and researchers dropped out of their studies and either left the country for better chances, got dragged to prison or even killed during the war. This reduces their number even more. However, nowadays the situation is a little bit better.

What is the collaboration with colleagues in Germany and BAM like for you?

“If you have one bad apple in the bunch, it can really hurt the morale and enthusiasm of an entire department,” says Andy Teach, author of the book “From Graduation to Corporation”. For me, I always try to be a good apple, to have a healthy and supportive relationship with my colleagues. Respect, communication, listening, helping and asking for help, accepting feedback and teamwork are the most important factors to collaborate effectively with everyone. Overall, the people here are very nice, and I never had problems coming in contact with them.

Is there anything regarding the work at BAM that you had to get used to at first?

For me, working full-time was a totally new system. Particularly if you are a student and you have a family. However, later I got used to it. In addition the security check was quite annoying initially: every morning I needed to show my work ID to the guards at the main entrance, but later I understood how important the security is at BAM.

What abilities, skills or kind of knowledge do you bring from Syria?

I have the ability to work under pressure and adapt to all circumstances. Once, we were attending an exam while we were being bombed 100 meters away from the exam hall. Surprisingly, I passed the module that day. I believe that the war took a lot away from us, but at the same time, made us tougher and gave us a strong robustness and determination.

What do you want to achieve next in your career?

I see a Ph.D. as a natural progression after receiving a master’s degree. Therefore, I will go for it. 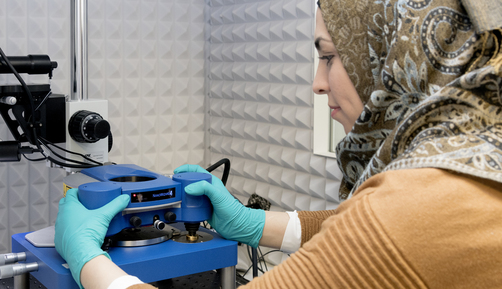