From the fire station to science Safety - a common thread

Within his Ph.D, Dr. Thorsten Schönfelder investigated the safety of breathing air cylinders used by firefighters as part of their protective gear when extinguishing fires and simulated firefighting actions in the laboratory for this purpose. He was able to draw on many years of practical experience for his work: he was a firefighter for almost two decades.

Firefighters going into burning buildings must wear respirators because of the smoke. These are equipped with gas cylinders called Type III pressure vessels which supply the firefighters with breathing air. The health and life of the firefighters depend on them during actions which is why they must be able to withstand great heat.

"During actions, the gas cylinders strapped to the firefighters’ back can be exposed to temperatures of up to 250°C" – Schönfelder explains as the starting point of his research. "The safety of brand-new containers must be tested before being put up for sale, but only at a temperature range of -40°C to 65°C." This temperature difference was the research field of Thorsten Schönfelder. In his Ph.D thesis, which he prepared at the Tanks for Dangerous Goods and Accident Mechanics Division and submitted at the University of Wuppertal, Schönfelder dealt exclusively with the breathing air cylinders of the Berlin fire brigade. He investigated how safe the gas cylinders were in cases of fire. The mechanical engineer knows exactly what he is talking about: before moving to BAM in 2012, he worked full-time as a firefighter for the Berlin fire brigade.

The road to science: between fire station and lecture theatre

After 17 years of working as a firefighter, the time had come for a professional redirection: "At some point I realised that I needed something different", says Schönfelder, explaining his decision to switch from the fire engine to the lecture theatre. In addition to his full-time employment as a firefighter, he began to study engineering at the Beuth University of Applied Sciences Berlin in 2006. "That was a nice, albeit exhausting time", Schönfelder recalls. But the effort was worth it. The combination of study and practical experience was the stepping stone for his entry into science. After completing his studies, Schönfelder swapped his job as a firefighter for a Ph.D position.

Ph.D at BAM: simulated fire rescue service in the laboratory

The data obtained enabled Schönfelder to make statements as to when the breathing air cylinder would theoretically fail during a firefighting action. The good news for all firefighters: Schönfelder was able to prove that the breathing air cylinders are safe even at high temperatures. Although the cylinders are not designed to be used at very high temperatures, the model tested offers enough safety to be used in firefighting.

Safety is the common thread

In the meantime, Schönfelder is devoting himself to a new area of responsibility at BAM. As an expert for the approval of transport containers for radioactive materials, he is working on the safe exit from nuclear energy at the Safety of Transport Containers Division.

He never regretted giving up his job at the Berlin fire brigade for a Ph.D position at BAM. His knowledge from the field lends itself very well to his new work environment. When asked about the biggest difference between his work at the Berlin fire brigade and BAM, he first found a common ground: "It is all about the safety of the population. The only difference is that firefighters take part in the action. At BAM, we try to act preventively through science and technology". 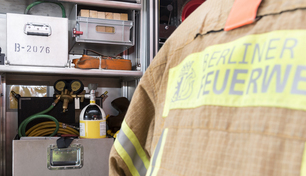 Image GallerySafety is the common thread